The International Combat Hapkido Federation (ICHF) is an independent organization of Martial Arts Schools and Individual members established for the purpose of teaching, promoting and regulating the Combat Hapkido Self Defense system. The ICHF is the only official governing body and Certification authority for Combat Hapkido. Chon-Ji Defensive Arts, LLC is a charter school member of the ICHF and is certified to teach and rank individuals in this system. 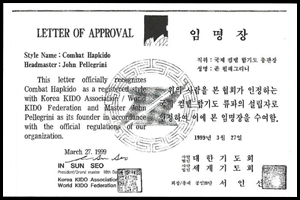 In March 1999, Combat Hapkido was officially accredited and registered as a recognized style (Kwon) of Hapkido by Grandmasler ln Sun Seo, Chairman of the World Ki Do Federation. Grandmaster Pellegrini was recognized as its Founder. Combat Hapkido was the first nontraditional Hapkido style, founded by o non-Korean, to receive such recognition by the World Ki Do Federation, on organization founded in 1963 and chartered by the Ministry of Culture and Education of the Korean government to oversee Korean Martial Arts around the World. Combat Hapkido is known in Korean as: "Chon-Tu Kwan Hapkido".

To schedule an introduction, please use our contact form